From the Belgian factories of Theofil Mortier came some of the most elegant organs the world has ever seen,

Famous for their magnificent proceniums (fronts/facades). Some were in the form of temples, others resembled palaces. Even the simpler designs of the earlier years were triumphs of the woodcarver's art. Most instruments were sold in Belgium, the country of manufacture. A few found their way to the near provinces of France and the Netherlands; scarcely any went further from home. This organ, with over 400 pipes, was built in 1924 as a large 'Clasic' organ. Gebrs Decap of Antwerp modernised it in 1946 as a so-called 'Jazz Organ'. At this time, sets of pipes were replaced and a visible percussion set placed on top of the main organ case. Very popular since is the accordion, which can be seen to open and play when register is on.

This organ came to Rothiemay from Belgium in 1967 and was the first large 'Book Dance Organ' ever to come to Scotland, a position it still holds to this day. The organ was completely rebuilt with a new accordion being fitted, temple blocks added, and a coupler designed so that it can play two differnt scales (sets of books).

This organ would have been installed in a dance hall or travelled in a tent with a portable dance floor. Fair organs differt from dance organs, the former being very loud-voiced for outdoor use such as at a fair. The dance organ, on the other hand, is softly voiced in comparison, with strongly accented rhythm and short and powerful chords to maintain the dance rhythm.

Gebrs Decap of Antwerp build modern dance organs to this day, these being pipe/electronic with up to four accordions. These can be seen in the many cafe/restaurant/dance halls located on the motorways of Belgium and Holland. On Sundays one will find the organs playing non-stop all day for music and dancing.

A number of these organs can be seen in preservation in museums in England, Netherlands, Belgium, Germany and the USA. 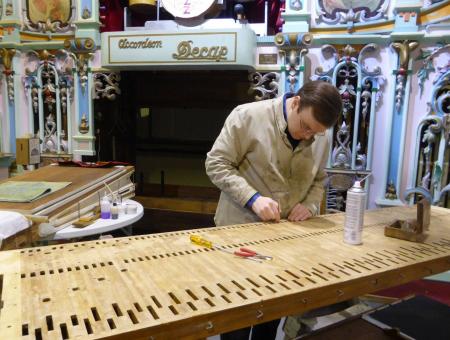