This truck started life as an American military tank recovery tractor during the Second World War. In the early 1960s it was bought by Aberdeen County Council and made into a snowplough.

American Mack military vehicles were widely used for heavy haulage, recovery, and specialist duties during dispersal after the war. In the late 1940s the Mack was sold to Hibble and Mellors Funfair of Nottingham and used to haul the fairground rides. The original 2-4mpg petrol engine was replaced by a more powerful 5 cylinder Gardiner unit.

When Aberdeen County Council obtained this vehicle another replacement engine, an AEC,  was fitted along with a Leyland ‘custom export’ cab and power steering. The dissolution of Aberdeen County Council saw the Mack pass to Grampian Regional Council in 1977.  This Mack was in service as a snowplough until 1985 when it was replaced by a more modern Magirus.

The Mack, although relatively primitive, was well respected by snowplough drivers for its enormous strength.  With snow chains on all wheels for extra traction they could deal with 10-15 foot drifts and several feet of level snow.  This vehicle saw 50 years of active service and now enjoys a well-earned retirement! 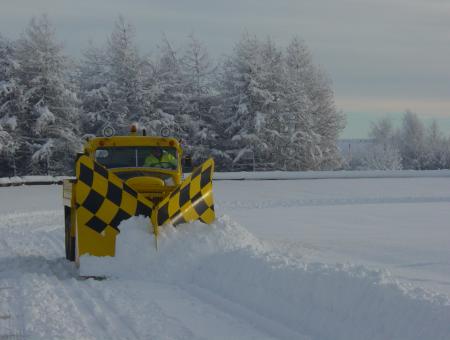