The fourth Anglia model, the 105E, was introduced in 1959. Its style was quite American with sweeping lines, an inclined rear screen and full width front grille much like a 1950s Studebaker.

With a new 997cc OHV engine, performance was much improved on earlier models and in 1960, the first full year of production, 191,752 Anglias left Ford’s Dagenham plant setting a new annual production record for the Ford Motor Company.

TSA 435 was a familiar sight around Huntly until very recently.  It was purchased brand new in 1960 by James Strachan, a well known local gardener in the town, for £655 including £5 for a year’s road tax and less £220 for the trade-in of a 1954 Ford Popular. The receipted invoice (right) from Huntly Motors records the transaction.

James went on to use the Anglia as an everyday car from 1960 to 2000 covering 200,000 miles during the 40 years!  He looked after it well - the engine and gearbox are original as is the body, paint and interior.  After 2000 James switched to a VW Polo.  He used the Anglia to attend classic car shows where it won prizes for originality until James died in 2018.

James was a very capable mechanic and kept the Anglia in a small but well equipped garage where he also made models of Stirling (exterior combustion) engines.  He wanted this museum to look after his old friend for fear of it being fitted with a Rover V8 engine! 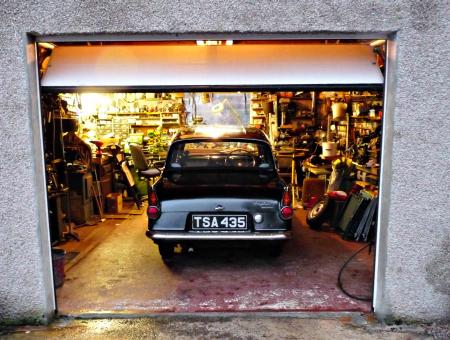