The Great North of Scotland Railway Company built a magnificent hotel at Cruden Bay in 1898.  Electric trams were used to carry passengers and luggage between the hotel and the station.

In 1898 work commenced on the building of a 3' 6" gauge tram line and a special generator to supply the 500 volts DC for the overhead live wire. Construction of the rolling stock was put in hand at the Kittybrewster works and consisted of: 2 single deck 4 wheel trams, a 4 wheel van and an open 4 wheel trailer.

The hotel opened in March 1899 and the tramway immediately began to carry traffic – although the trams had to be horse-drawn until the generator station was completed in June of that year.

The Cruden Bay Hotel was profitable in its early years but by 1921 was showing an annual deficit.

In 1932, the railway line through Cruden Bay closed to passengers and the hotel’s isolation was heightened. The trams continued to carry goods and laundry until the army requisitioned the hotel in March 1941. At this time, the 2 trams were dismantled, with the metalwork being scrapped for the war effort, and the saloon bodies sold locally for use as summer-houses.

In the late 1980s, a restoration project was begun by Aberdeen City Council, in liaison with Aberdeen Museums and the Grampian Transport Museum. The work was completed in August 2000 with financial assistance from the Heritage Lottery Fund, Pilgrim Trust, Hugh Fraser Foundation and the Mercers’ Company.

Both of the Cruden Bay Hotel tramcars are now housed in this building, but No 1 consists of only doors, windows, pieces of roof and about 300 small pieces of timber saloon! 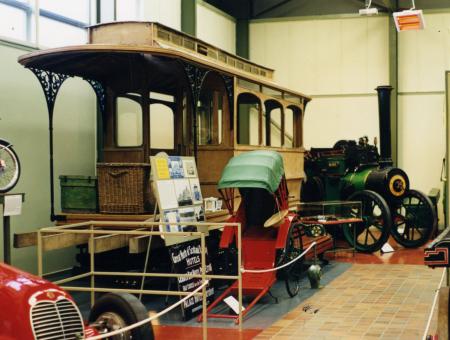